No Foreign Bases: Challenging the Footprint of US Empire

The United States cannot be a moral or ethical country until it faces up to the realities of US empire and the destruction it causes around the world. The US undermines governments (including democracies), kills millions of people, causes mass migrations of people fleeing their homes, communities and countries and produces vast environmental damage.

A new coalition, The Coalition Against US Foreign Military Bases, held its inaugural event January 12-14, 2018 at the University of Baltimore in Maryland. The meeting was framed by a Unity Statement that brought together numerous peace and justice organizations. The basis for unity was:

You can endorse the statement here. 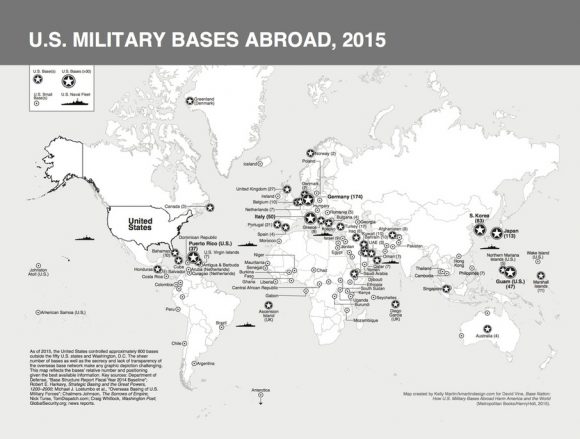 US foreign military bases as of 2015. (Source BaseNation.us)

Ajamu Baraka of the Black Alliance for Peace and the vice presidential candidate for the Green Party in 2016 opened the conference, describing the responsibility of the people of the United States (USians) to protect the world from US aggression. He argued:

“The only logical, principled and strategic response to this question is citizens of the empire must reject their imperial privileges and join in opposing ruling elites exploiting labor and plundering the Earth. To do that, however, requires breaking with the intoxicating allure of cross-class, bi-partisan ‘white identity politics.’”

This reality conflicts with one of the excuses the US uses to engage in war – so-called ‘humanitarian wars’, which are based on the dubious legal claim that the US has a “responsibility to protect.” The United States is viewed as “the greatest threat to peace in the world today” by people around the world.  Thus, USians need to organize to protect the world from the United States. …